Some of the first known Methodist missionary work was a result of visits from British Columbia to Wrangell in 1877 by the Reverend Thomas Crosby, pastor of the Fort Simpson Methodist Church.

In 1886 John and Ethelda Carr were sent by the General Agent for Education in Alaska, Dr. Sheldon Jackson, to start a school and church in Unga in the Shumagin Islands. The Women’s Home Missionary Society of the Methodist Episcopal Church furnished support and travel money for Mrs. Carr. Methodist work carried on sporadically in Unga until about 1953.

In 1890 the Women’s Home Missionary Society furnished money to build and operate a children’s home in Unalaska, named for Jesse Lee, one of the early itinerant Methodist preachers on the New England and east coast.

The Klondike Gold Rush began about 1897 and the Reverend Carl Larson, appointed by Presiding Bishop Charles McCabe, came to preach to the miners who were primarily speakers of Scandinavian languages. Larson preached in Douglas, Juneau, and Skagway, and set up his gospel tent in Dyea. McCabe Methodist College was built in Skagway in 1899; Douglas had a church built in 1901 and Ketchikan in 1902.

The first Annual Meeting of the Alaska Mission was held in Juneau in July 1904. 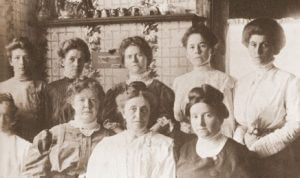 In 1905 the Seward church was established. Soon after churches were built in Fairbanks and Nome. Just east of Nome in Sinuk, the Women’s Home Missionary Society started a mission effort to help local people raise reindeer. A hospital was also organized in Nome.

World War Two and the Korean Conflict brought many people to the Great Land and much activity and growth took place in the 1950s.

The church at Hope, now a conference retreat center, was built in 1944. Moose Pass was added as a charge in 1945. The Women’s Division operated the Seward Tuberculosis Sanatorium starting in 1946.

Anchorage organized its first Methodist church in 1944 with a log cabin which was later enlarged and named the Baxter Memorial Methodist Church. In 1952 a new Methodist church was organized in Fairbanks. Other churches soon followed. Argetsinger (Eagle River) and Birchwood Camping Ministries were started in the late 1950s. Cooperative projects were begun with Presbyterian churches. The Alaska Native Ministries Programs were given a boost in 1974 with Native Land laws and the start of the oil pipeline construction. An Alaska Council of Churches was formed in 1958.

Alaska Methodist University was begun in the mid-1950s. A few churches have closed over the years but 28 currently are strong and active. Various ministries have focused on youth, students, military chaplaincy, indigenous peoples, music, health, economics, environment, global relief and general missions.

By Larry Hayden, chair, Commission on Archives and History of the Alaska United Methodist Conference, for the conference website of, used with permission.