Lynching Is an Indefensible Crime 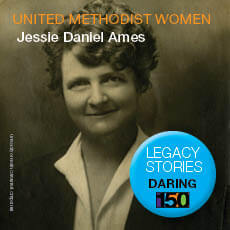 In 1930 Methodist woman Jessie Daniel Ames gathered a small group of daring women together in Atlanta, Georgia, to form the Association of Southern Women for the Prevention of Lynching.

The protection of white women had been a common excuse for white mob lynchings of black men, and so the women were determined to use the power of their mission societies to stop this terrorism in their names. The women drafted a statement saying, “Lynching is an indefensible crime. Women dare no longer allow themselves to be the cloak behind which those bent upon personal revenge and savagery commit acts of violence and lawlessness in the name of women. We repudiate this disgraceful claim for all time.”

By 1937,109 women’s organizations representing more than 4 million women had joined in the campaign. One of the association’s most prominent endorsing groups was the Woman’s Missionary Council of the Methodist Episcopal Church South, one of United Methodist Women’s predecessors. Bertha Payne Newell, superintendent of the Woman’s Missionary Council’s Bureau of Christian Social Relations, served as secretary of the association.