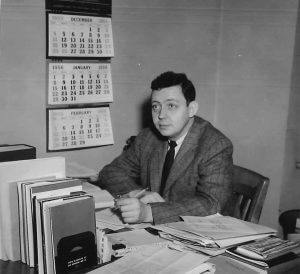 Arthur J. Moore, Jr. was for 34 years an editor of the mission magazine of The Methodist Church, then The United Methodist Church, first with World Outlook, and later the editor in chief of New World Outlook for 22 years. At its peak, the publication has a circulation of more than 100,000.  He was the son of Bishop Arthur Moore, Sr. president of The Methodist Board of Missions for almost 20 years and bishop of the Atlanta area from 1940 to 1960.

As Betty Thompson [a colleague] wrote of him when he retired: “Arthur found his true vocation as this magazine’s editor. He brought to the magazine an encyclopedic knowledge of church and culture … [a] keen intellect, wit, and intimate knowledge not only of his own church but of Christendom …. “

Lifelong concerns for Christian unity and racial justice can be seen in his early articles from 1956 and 1957, Graham wrote, “So it is not surprising for us to learn that Arthur was part of the civil rights march from Selma to Montgomery, Alabama, led by the Rev. Dr. Martin Luther King, Jr., in 1965-or that he covered assemblies of the World Council of Churches in New Delhi, India (1961); Uppsala, Sweden (1968); Nairobi, Kenya (1975); and Vancouver, B.C. (1983), or that he reported on the Second Vatican Council for Religious News Service in 1965.

“Arthur was also a contributor to Christianity and Crisis (on whose board he served), Commonweal, Worldview, The Christian Century, and the National Catholic Reporter. A native of San Antonio, Texas, born May 7, 1922, he served in the Navy in the Pacific during World War II and graduated from Emory University in 1947.”

In 1988, Arthur was elected to the United Methodist Communicators Hall of Fame. In 1990, he was given a Citation of Honor by the Associated Church Press.

Arthur Moore transformed New World Outlook from a traditional mission magazine into a publication that covered and commented on contemporary events and that won award for editorial excellence and graphic design.

This profile is drawn from a tribute to Moore written by Alma Graham, then editor of New World Outlook in the September-October 1996 issue of the magazine.