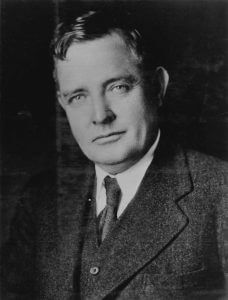 Bishop Arthur J. Moore was “Mr. Mission” for a generation of Methodists in the middle of the 20th century. He was president of the unified Board of Missions of The Methodist Church (forerunner of the Board of Global Ministries) from its founding in 1940 through 1956, and had played a pivotal role in the extensive mission work of the Methodist Episcopal Church South (MECS), beginning in 1934.

Arthur Moore was born on December 26, 1888, in Argyle, Georgia, and as a young man worked as a railroad flagman. He became a Christian and a church member in 1909 and began his ministry as a lay evangelist. Ordained deacon in 1912 and elder in 1914 he served as a general evangelist until 1920, when he was appointed pastor of the Travis Park Methodist Church in San Antonio, Texas. In 1926, he was moved to the First Methodist Church of Birmingham, Alabama, and in 1930 was elected to the MECS episcopacy, assigned to Pacific Coast Area.  He studied at Emory College in Oxford, Georgia, but never graduated from a theological seminary.

As northern and southern branches of the Methodist Episcopal Church, joined by the smaller Methodist Protestant denomination, planned for union in the late 1930, Bishop Moore led a Bishops’ Crusade to enliven commitment to mission in the American Methodist family.  With union in 1939, he was appointed to the Atlanta Episcopal Area, where he served until his retirement in 1960. He was president of the Council of Bishops in 1951–52.

Bishop Moore traveled the world in his capacity as president of the Board of Missions. He followed Methodist founder John Wesley in seeing the entire world has his parish. The last of his many books in 1973 was an autobiography entitled Bishop to All Peoples.

His influence reached into many parts of Methodism.  In 1934, he was one of a group of leaders who created The Upper Room, the widely used daily devotional guide. He served on the board of numerous colleges, universities and health facilities, and played a role in developing the Epworth by the Sea retreat center on St. Simons Island, Georgia.

He was awarded a certificate of honor for work in humanitarian relief by the Chinese government in 1938 and in 1952 President Syngman Rhee of Korea presented him with the Korean National Medal of Honor.

In 1906, Moore had married Martha McDonald, who died in 1964, with whom he had five children, including Arthur J. Moore, Jr. who was for many years editor of New World Outlook, the official mission magazine of The United Methodist Church.

The bishop remained active as an evangelist until his death on June 30, 1974.

(The material for this profile was provided by a range of sources, including the Internet archives of The New York Times, the South Georgia Annual Conference, and the State of Georgia, and the pages of World Outlook and New World Outlook magazines. The papers of Bishop Moore are housed at the Pitt Theological Library of Candler School of Theology, Emory University, Atlanta, Georgia, and at the Methodist Museum, Epworth-by-the-Sea, St. Simons Island, Georgia.)