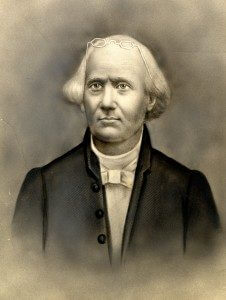 Capers was born in South Carolina in 1790, the son of a well-to-do rice plantation owner. Given a fine classical education in his youth, he became a Methodist preacher at the age of eighteen and accepted a charge in the South Carolina Conference. After several years of pastoral service, Capers was appointed missionary to the Creeks in eastern Alabama and western Georgia, an area then within the bounds of the South Carolina Conference. He served seven years as the Native American mission superintendent.

Following his mission service, Capers filled appointments back in South Carolina as pastor, presiding elder, and editor. Between 1827 and 1840, he became the leading spokesman for developing missions among the plantation slaves, overcoming occasional opposition on the part of whites. He was credited with opening the first plantation mission in 1829. He gave powerful support to the movement ever after. An 1840, the General Conference elected Capers to be one of three missionary secretaries, giving him responsibility for the annual conferences in the South.

Capers led the fight on behalf of Bishop James O. Andrew at the 1844 General Conference and was the author of the basic plan for the division of the Methodist Episcopal Church when it became apparent that no other acceptable solution was available. He was in the chair to convene the Louisville Conference of 1845 which gave birth to the Methodist Episcopal Church, South. After Bishops Joshua Soule and Andrew took over presidency of the meeting, Capers chaired the missions committee which laid the foundation of the missionary activity of the new church. When the Methodist Episcopal Church, South met for its first General Conference at Petersburg, Virginia, the following year, it elected two bishops to supplement Bishops Soule and Andrew. The first man chosen was Capers. Capers served as bishop until his death in 1855, never losing his love for missionary work among the slaves.

Taken from Robert W. Sledge, “Five Dollars and Myself”: The History of Mission of the Methodist Episcopal Church, South, 1845-1939. (New York: General Board of Global Ministries, The United Methodist Church, 2005), p. 43.