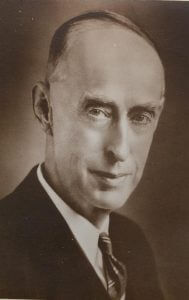 Everell Stanton (E.S.) Collins was an American lumberman and Methodist laymen who at this death in 1940 left the income from vast forest tracks in Pennsylvania and California to the Methodist Board of Foreign Missions; today, the Collins Forest income provides health and retirement benefits for qualified missionaries who serve through the United Methodist General Board of Global Ministries, a successor to the Board of Foreign Missions.

Collins was born in Cortland, New York in March of 1866, but soon was at work with his father in the woods of Pennsylvania. The Collins family history on the internet reports:

As a boy and a young man, E.S. worked in his father’s mills and forests in the Tionesta Valley of Pennsylvania. At thirteen, he’d already spent winters in sub-zero temperatures hauling timbers out of frozen creeks. At fifteen, he was working in the mill jacking logs and edging. By eighteen, he was running the mill. In between, he’d taught himself the skills of an engineer and patented a pocketful of sawmill inventions.

His formal education included the school in Beaver Valley, Pennsylvania, then onto Carrier Seminary in Clarion, Pennsylvania, and finally, one year at Allegheny College. That one year came to an abrupt end when he had to withdraw because of chronic coughs and colds referred to then as consumption. When he wasn’t working in the mill, the forest, or going to school, he was avidly attending services in the Methodist Church and taking in revival meetings that came through the area. There was, of course, always time to be a boy – hunting squirrels, ducks, grouse, woodchucks, and rattlesnakes; fishing for trout; cutting beehives from trees; hiking, swimming, and berry picking.

Simply said, E.S.’s young years boiled down to school, church, fun, and work, then more work, and more work. Then there was God: he trusted in God. (www.collinsco.com/history/In-Depth.php)

Heeding the advice of Horace Greeley to “go west young man,” Collins explored timber options in several areas and came to focus on the Pacific Northwest and Northern California. His Methodism went with him. He developed a major, family-owned company, headquartered in Portland, Oregon, that would come to stress good stewardship in the use of land and forest. He also built a fortune, using much of it for philanthropic purposes. He is remembered, as an editorial in the Oregon Journal said on January 1, 1941, as “shy, serious, disciplined, intelligent…He acquired a life of meaning and purpose.” E.S. Collins and his wife, Mary Laffey, had three children.

The Journal editorial enumerated many of the institutions and causes Collins endowed, concluding: “But perhaps his most generous gift was giving, in perpetuity, 60 per cent of the net profits from the Collins Pennsylvania Forest and the Collins Almanor Forest (in California) to the Board of Foreign Missions of the Methodist Church.”

The income streams from the original land and trusts were consolidated over the years to provide support for missionary health and retirement benefits programs. The annual revenue depends on the harvest.