Educational Missionary in Liberia and Beyond 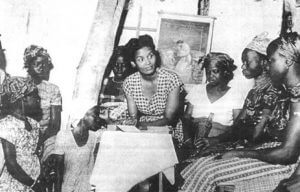 Vivienne Newton Gray has been a public school teacher, religious social worker, Field Secretary with the Woman’s Division (1945-48), educational missionary in Liberia, West Africa (1948-74), and director of admissions and director of alumni affairs, Wiley College, Marshall, Texas. Working as a religious social worker with migrant families, Vivienne opened and staffed child-care centers, and formed reading, religious, and food preservation programs in Florida and New Jersey. As Field Secretary, she traveled throughout the Central, North Central, and Northeastern Jurisdictions holding seminars and leadership workshops, and teaching in Schools of Christian Mission. She was the first black woman to stay overnight at Mt. Sequoyah (a Methodist conference center) near Fayetteville, Arkansas where she served as assistant teacher in the South Central Jurisdiction’s School of Missions. In Liberia, she established a school in Gbarnga. The high school section in named in her honor. In the Liberian interior, Vivienne was a consultant for the Woman’s Society and taught child care, home management, and adult literacy classes. She and her husband were “parents” to a host of Liberian children who later became leaders in government and church. Vivienne was named Liberia Teacher of the Year in 1968, and decorated by the Liberian government in 1974 for educational contributions to the people of Liberia.