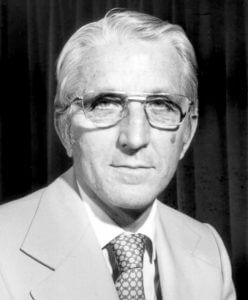 At his passing, Haines was described as “a saint, a model of Christian commitment, hard work, and inspiration” by the Rev. R. Randy Day, chief executive of the United Methodist Board of Global Ministries, the parent organization of UMCOR. “For years he was Mr. United Methodist Relief, rallying the church to aid people affected by natural disasters, wars and poverty.”

Haines, a native of New Zealand, was a missionary in China in the 1940s and later in Malaysia. He then worked in the division of interchurch aid, refugees and world service of the World Council of Churches.

At UMCOR, he was an advocate for service to those in need and for education about the impact of poverty and political oppression on millions of people.

“He was a man of great energy and contagious hope,” Day said. “He wrote widely on the themes of mission and humanitarian assistance and their inseparable identities. He was a dynamic speaker, and loved nothing more than to visit congregations to tell them the story of how the church responds to disasters and humanitarian needs.”

He wrote seven books published by Abingdon Press, a part of the United Methodist Publishing House, including an analysis of China and its 20th century political revolutions. Haines continued to be active on behalf of mission after his retirement.

Haines was a strong supporter of economic self-development of people in poor countries and among the marginalized in more affluent regions. He was quick to observe the growing global gap between the richer North and the poor South. In 1984, shortly after his retirement, Haines made an urgent appeal to the church to “realize that we’re living in a bitterly divided world (and) we have limited resources; therefore, we have to be specialists in designated areas in the least developed countries.”

J. Harry Haines was born June 29, 1917. He and his wife, the former Loma Housley, the daughter of missionaries, married in 1944. The couple had four sons, two of whom preceded him in death.

Haines received his early schooling in New Zealand, Australia and England. He was awarded a bachelor of arts degree from Western Maryland University, Westminster, and his theological degree from what is today Wesley Theological Seminary. He earned the master of arts and doctor of philosophy degrees from Princeton University.

He held membership in several United Methodist annual (regional) conferences during his ministry. At the time of his death, he was a member of the Oregon-Idaho Conference. Haines served for 38 years — including the 21 as a missionary — with the Board of Global Ministries and its predecessor organizations.

Initially written in 2007 for United Methodist News Service (UMNS) and adapted in 2017 by Elliott Wright, one-time information officer of the General Board of Global Ministries.