May Peace Abound: The Legacy of Georgia Harkness

“May truth and freedom come to every nation; may peace abound where strife has raged so long; that each may seek to love and build together, a world united, righting every wrong; a world united in its love for freedom, proclaiming peace together in one song.” 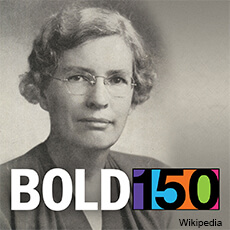 The New Yorker Georgia Harkness, who wrote these words, was born in 1891 and was not only an accomplished poet and writer, but also a well-known pacifist, ecumenical theologian and the first woman to become a full professor at an American seminary. Harkness’s work blazed a trail for generations of women in the Methodist tradition, in particular those who sought to be ordained.

Though she had a wide variety of talents and interests, her primary vocation was as a theologian and teacher. From 1939-1950 Harkness taught systematic theology at Garrett-Evangelical Theological Seminary. She also taught at Elmira College and the Pacific School of Religion, among others.

Harkness’s theology was fundamentally liberal—she described herself as “a liberal unrepentant and unashamed”—and she sometimes clashed with the neo-orthodox thought of contemporaries such as Karl Barth and Reinhold Niebuhr. She was devoted to ecumenism and pacifism, even as many of her contemporaries wavered during the tension leading up to the second World War, and she was a lifelong advocate for gender equality and against racism. Though she was ordained as a local elder in 1938, women were not allowed to participate in annual or general conferences at that time, limiting their influence to a local context; later in her life, she would serve as a delegate to General Conference six times.

Before her death in 1974, Harkness wrote more than 30 volumes, primarily theological texts focusing on issues such as ethics, the role of the church in the world, and social responsibility. Her legacy lives on; even now, Garrett-Evangelical women wear red shoes to their commencement ceremony in honor of Harkness and other courageous women.

Today, the General Board of Higher Education and Ministry offers a scholarship for women in Georgia Harkness’s name: “Her emphasis on spirituality and social responsibility encourages a living faith and thoughtful, practical discipleship,” the description reads. “Harkness strove tirelessly for wholeness and truth in her long career as a theologian and as a disciple.”