Living Out Care for the Environment 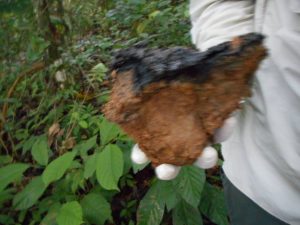 In 2016, I took a mission trip to the Ecuadorian Amazon Rain forest. We stayed at Yasuni National Park, that we reached by canoe. On day 1, a representative from Amazon Watch led us a short way into the rain forest. Reliably, it was drizzling. Yellow warning ribbon encircled the area. It was a “remediated area” of Chevron, Texaco, and the South American oil companies. The Amazon Watch person put on a glove and picked up a handful of soil. It was demarcated by oil and a few inches of soil. (See photo).  Ecuadorian Natalia Green showed us a slide of Ecuador sliced and diced for oil exploitation. And what about Brazil, where rain forest has been razed in order to graze cattle for the US diet? Rain forest becomes decertified after a short while, without trees to hold in the soil.

As a teacher in the Chicago Public Schools, I taught the Russian language. As such, I was hosting a girl from the Ukraine, who had come to Chicago to the Shriner’s hospital.  Then she came to live with me and to attend the school where I taught, for another 1.5 years. A student in one of my classes took Alla, the Russian Ukrainian, to a slaughter house and Alla returned with the book by John Robbins, Diet for a New America. There are photos in the center of the book, of animals in their natural habitat, and in factory settings. Those photos were so appalling that Alla and I stopped eating animals. That was 1991.

In Genesis, humans are given “dominion” over the Earth. Dominion means stewardship, not devil-may-care devastation of our Earth. But we are creatures of tradition, and we have memories around the table, of a turkey, or other poor animal at the center. Of course animals are necessary for the cycle of life. But a thousand animals in one spot, defecating and eating not grass, but a corn-soybean mash means possible. Consider that the majority of arable land is devoted to growing grains for animals. Monocropping is the order of the day. But monocropping saps nutrients from the soil. So our crops are doused in ersatz pesticides and fertilizers, some of them cancer causing.

The United Methodist Women had a mission study on globalization perhaps a decade ago. It concentrated on bottled water, shrimp and the media. The United Methodist Women also started a Green Team, that is now called Be Just; Be Green. So please go to https://www.unitedmethodistwomen.org/climate-justice to learn how to care for creation. And check labels. Reject anything (which is most everything) that has palm oil in it.  Indonesian rainforests are being felled in order to grow palms. Indigenous peoples and animals have nowhere to turn.