Evangelist and Pastor in Kenya

The following story is submitted by Rev. Keith Berry. Rev. Berry visited Kenya with his late wife Marcia in 1986 while a member of the World Methodist Council.

Erastus Kathurima graduated from a mission school in 1955 and became a shop assistant. His nation became independent in 1963, and his church, The Methodist Church in Kenya, became autonomous in 1967. Two years later a bishop asked him to become an evangelist. Eventually he became an ordained minister.

When we visited him in 1987, his home was just north of the equator, and he was serving 12 churches totaling 5,995 members just south of the equator. The pastor’s smallest congregation had 159 members. Normally, he hitch-hiked to his churches, because he couldn’t afford to buy fuel for his old car.

Because this pastor was serving 12—soon to be 13—churches, he could be in each congregation only four times a year. So, his biggest job was finding and training men and women to give leadership in each of these churches on the 48 Sundays of the year when he was not there.

Pastor Kathurima told us that every East African church goes through three stages. First, it looks like this.

A few benches under a tree is all it takes to start a new congregation..

The second stage is a structure made of “local materials.” These are saplings cut from the forest, and they need to be replaced frequently. 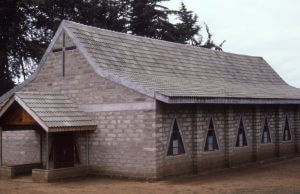 The third stage is a building made of “permanent materials.” These are concrete blocks that have to be purchased with money.