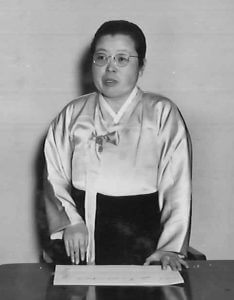 Helen Kim entered Ewha Methodist School in Seoul, Korea, in 1907, known then as Ewha Hakdang—founded in 1886 by US missionary (WFMS) Mary Scranton. Kim progressed through the primary and secondary schools to graduate from Ewha Hakdang College in 1918.

Kim traveled to the United States to study at Ohio Wesleyan University, where she graduated with honors in 1924. In 1925, she studied at Boston University receiving a master’s degree. In 1931, she earned a doctoral degree from Columbia University’s Graduate School for Philosophy. In doing so, she became the first Korean woman to receive a PhD.

In 1931, Dr. Kim returned to Korea to become dean of Ewha College, and in 1939, she became its president, a post she would have until 1961. Despite strict control of curriculum and activities by the Japanese during World War II, Dr. Kim developed Ewha’s offerings and student enrollment to become Ewha University. Just five years later she had to move the student body from its Sinchon campus to makeshift quarters in Pursan to escape fighting during the Korean War. After the armistice, they returned to Sinchon and rebuilt the university, adding more schools and a hospital. Under her leadership, Ewha became the largest women’s university in the world. With an enrollment today of more than 8,000 students, it still holds that distinction.

In 1948, while still serving Ewha University as president, Dr. Kim was named as South Korea’s director of public information for President Syngman Rhee. To facilitate communication with the United States, she became founder and publisher of The Korean Times, an English-language newspaper that is still published today. Dr. Kim also founded the Young Women’s Christian Association (YWCA) of South Korea.

After her retirement from Ewha University, Dr. Kim took up the work of evangelism in South Korea, visiting and working among construction, industrial, and farm workers in the country. “Win 30 million Koreans for Christ” was her motto. “I believe I am too old to continue to lead the young,” she said in a World Outlook interview in 1960. “I want to live with the people of Korea, and the time has arrived for me to turn to the word of God, whose guidance I will follow for the years that are left to me.”

A beloved and honored figure in Methodism, in hindsight, Dr. Kim’s pragmatism in dealing with the Japanese during World Ward II has stirred controversy. Yet pragmatism was a traditional trait of early Methodist missionaries who sometimes conducted their work under colonial occupiers while reaching indigenous populations. It is important to remember that the Japanese had been the occupying power in Korea since 1910, most of Kim’s adult life, when Korea’s freedom was finally obtained in 1945. Perhaps she explained it best in a speech given to the National Convention of the YWCA in Atlantic City, New Jersey, in 1946:

“This is the first time in 36 years that I have been able to appear before an audience of other nationalities as a 100 percent Korean. It is a great moment for me. Before, I have always had to pretend to be part Japanese, for I have known that I must return to Korea. I have always felt that I was censored in what I might say. The Japanese Emperor spoke to us on our freedom for the first time over the radio on August 15. That night, and for many nights following, we could not sleep. We were too happy to sleep. We were now Koreans. We did not have to be Japanese anymore. Maybe you do not understand the implications of this. If you cannot be what you are, it is the worst curse in the world.”