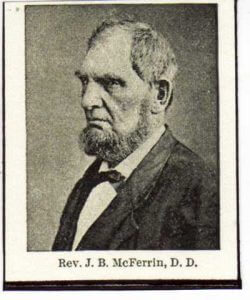 John B. McFerrin, aside from bishops the most significant figure of the MECS in the nineteenth century, was born in 1807 near Nashville. Licensed to preach at age eighteen, he received appointment to be missionary to the Cherokees from 1826-1828. After pastoring several churches, he was named presiding elder in 1836. The General Conference of 1840 elected McFerrin editor of the Christian Advocate. His was a powerful voice in print, pulpit, and platform during the crisis of the separation of Northern and Southern Methodism. He was an incomparable debater in any forum. In 1858, the MECS elected him book agent.

A refugee from Nashville after the city fell to Union forces during the Civil War, McFerrin became missionary to the Army of Tennessee 1863-1865 When the war ended, he put the Methodist Publishing House back together before being chosen general secretary for the Domestic Board of Missions for 1866-1870. When the two missionary agencies were combined under one secretary in 1870, that man was McFerrin. Only a crisis in the Publishing House caused him to leave the missions job to resume his career as book agent in 1878. He held that post until his death in 1887. His second wife was a cousin to David McGavock, the husband of the first secretary of the Woman’s Foreign Missionary Society.

In his career, he baptized hundreds into the MECS, including John Ross, principle chief of the Cherokee nation, and James K. Polk, eleventh U.S. president.

Taken from Robert W. Sledge, “Five Dollars and Myself”: The History of Mission of the Methodist Episcopal Church, South, 1845-1939. (New York: General Board of Global Ministries, The United Methodist Church, 2005), p. 94.