Care for the Earth: A Legacy of Acting for Climate Justice 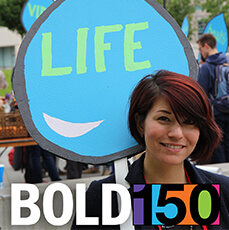 Though language surrounding climate justice has shifted slightly over the years, United Methodist Women has been promoting care for creation since it first began to become a national concern in the 1970s. In 1970, Earth Day—April 22—was first observed, marking the beginning of the modern environmental movement. Just a few years later, response magazine was addressing the issue.

“Why should we care about the ocean?” Barbara Weaver asked in a March 1979 article. “In very practical terms it is the source of our lives, giving us the oxygen and water we need. We are interconnected with the ocean by the nature of our being.” She goes on to discuss the various ways in which clean water is important to everyday life as well as to the economy.

The next month, on the ninth observance of Earth Day, a study called “The Earth is the Lord’s” ran in response. The goal of the study was “To encourage commitment to the conservation of resources – their more efficient as well as their reduced use. To encourage United Methodist Women to simplify lifestyles as an appropriate response to the concept of stewardship of all of life,” and it included an energy use audit, where participants could evaluate their daily energy consumption. For example, were the refreshments served at the meeting wrapped in unnecessary plastic products? Did the attendees drive, carpool, use public transportation or walk to the meeting?

More recently, an initiative called Be Just. Be Green has encouraged United Methodist Women members to deepen their commitment to eco-justice with 13 steps to a more sustainable lifestyle. At the 2014 Assembly, United Methodist Women worked with an environmental consultant to reduce impact on the environment through steps such as composting and using local food sources.

United Methodist Women knows that climate justice is an issue that concerns more than just the environment. The effects of climate change are widespread. In April 2016, response editor Tara Barnes noted, “Climate change disproportionately impacts those least responsible for its progression, those already marginalized and discriminated against.”

For many years, United Methodist Women has acted for climate justice—and now it’s a top priority.