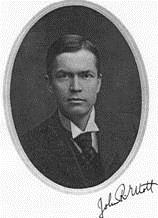 Mott was born in Livingston Manor, New York. Raised in Postville, Iowa, in a pious Methodist home, he graduated from Cornell University in 1888 with a bachelor of philosophy degree and later received honorary degrees from Yale, Edinburgh, Princeton, Brown, Toronto, and other universities. While a Cornell undergraduate, he passed from agnosticism to faith through an evangelical conversion. Shortly thereafter, at Dwight L. Moody‘s summer conference at Mount Hermon, Massachusetts, he was among the first hundred to sign the Student Volunteer Movement (SVM) declaration “It is my purpose, if God permit, to become a foreign missionary.”

It was as Methodist layman, student leader, and international church statesman that Mott was to fulfill that commitment. While an undergraduate he built the Cornell University Christian Association into the largest and most active YMCA chapter on American campuses and served as its president. A one-year assignment upon graduation as traveling secretary with the intercollegiate YMCA stretched into 44 years of service as it student secretary (1888-1915) and general secretary (1915-1931). His charisma, evangelical fervor, and call for the “evangelization of the world in this generation” at successive SVM conferences resulted in enlistment of over 20,000 missionary volunteers by 1951.

Believing that Christian students could be the lever to move the world toward God, Mott led in the formation of the World’s Student Christian Federation in 1895, becoming its general secretary (1895-1920) and its chairman (1920-1928). His world travels on behalf of the YMCA, the SVM and the WSCF (a total of 1.7 million miles) stimulated the formation of national cooperating bodies, as well as the first ecumenical links between Orthodox and Protestant Christians and reconciliation between Christians of nations that had been at war.

As one of the founders of the Foreign Missions Conference of North America (1893), Mott led the planning for the World Missionary Conference at Edinburgh in 1910, served as its chairman, and headed its continuation committee. In 1912 and 1913 he circled the globe to stimulate the formation of national associations of students, youth, and churches and to conduct mass evangelistic crusades in China and India. He was instrumental in 1914 in establishing the Missionary Research Library in New York City. In 1921 he teamed with J. H. Oldham to form the International Missionary Council (IMC), with Mott as chairman (1928-1946). Through the IMC he promoted global cooperation in missions and developed a pattern of representative leadership from churches of East and West, North and South, that became normative for the ecumenical movement.

Mott can rightly be called the father of the World Council of Churches (WCC) having been a leader in each of the movements that led to its formation. He played a large part in the first world conferences on Faith and Order (Lausanne, 1927; Edinburgh, 1938), and in those of the Life and Work movement (Stockholm, 1925; Oxford, 1937). Having chaired the provisional committee of the WCC, he was named its honorary president at the inaugural assembly at Amsterdam in 1948. 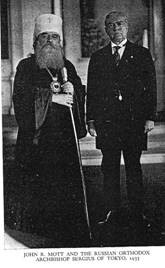 Mott saw the value of international Christian witness concerning issues of world peace and justice. Under his leadership, both the IMC and the YMCA engaged creatively in many partnerships with governments. The American YMCAï¿½s National War Work Council under his chairmanship enlisted 20,000 men and women for relief work and service to soldiers and prisoners in 1915. He received the American Distinguished Service award for serving on President Woodrow Wilsonï¿½s peace commissions to Mexico and Russia in 1916 and 1917, honors from more than twenty countries, and the Nobel Peace Prize (1946). He is buried in the (Episcopal) Cathedral Church of St. Peter and St. Paul in Washington, D.C.

Mott, John R. “Before the Russian Orthodox Church,” and “At a Dinner given by Mr. Emmanuel Nobel,” in America’s Message to the Russian People; Addresses by the Members of the Special Diplomatic Mission of the United States to Russia in the Year 1917. Boston: Marshall Jones Company, 1918. Pp. 105-116.

_____. The Continuation Committee Conferences in Asia, 1912-1913: A Brief Account of the Conferences Together with their Findings and Lists of Members. New York, 1913.

_____. The Evangelization of the World in this Generation. New York: Student Volunteer Movement for Foreign Missions, 1901.

_____. The Pastor and Modern Missions: A Plea for Leadership in World Evangelization. New York: Student Volunteer Movement for Foreign Missions, 1904.

_____. The Present-Day Summons to the World Mission of Christianity. Nashville: Cokesbury Press, 1931.

_____. The Present World Situation: With Special Reference to the Demands made upon the Christian Church in Relation to non-Christian lands. New York: Student Volunteer Movement for Foreign Missions, 1915.

_____. Strategic Points in the World’s Conquest: The Universities and Colleges as Related to the Progress of Christianity. New York: F. H. Revell, 1897.