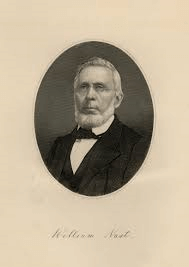 Wilhelm Nast is appropriately known by German Methodists today, by the title of “The First German Methodist Missionary,” as well as the founder and organizer of the German branch of the Methodist Episcopal Church.

Nast was born in Stuttgart, Germany, in 1807 and confirmed in the Lutheran Church at fourteen as was customary. Through a combination of strong family Christian influence and exposure to Lutheran pietistic prayer meetings, Nast felt an early and strong call to missionary service. He even talked seriously about attending a missionary training institute, until his family convinced him of the advantages of a more traditional theological education and his gifts for pastoral service. He subsequently entered a lower seminary as preparation for his entry to Ttibingen University. After some struggle with his pastoral call, Nast declined to take a pastoral appointment in the state-supported Lutheran Church. Nast’s desire to become a teacher of classics led him to emigrate to America, where the dearth of available persons to teach classics became Nast’s opportunity. After teaching for a number of years, most notably as German teacher at the U.S. Military Academy at West Point, Nast became attracted to the same pietistic elements in Methodism which had also so impressed Wesley in Savannah: the German protest against ecclesiastical formalism, the stress on inner regeneration, and an emphasis on the “priesthood of all believers.”

Nast quickly synthesized in a vigorous way his teenage ambition to be a missionary, along with realizing the promise of his pastoral and theological gifts. Through his long ministry, many German immigrants were gathered around him in Methodist classes, which formed the basis of the German Districts of the Methodist Episcopal Church. Some of his first contacts who met with Nast in these class meetings were K. H. Doering and L. S. Jacoby, who later became District superintendents for the Pittsburgh German District, and the St. Louis German District, respectively. Even more significantly, L. S. Jacoby was later to return to Germany to take up a post as Superintendent of the fledgling Methodist Episcopal Church in Germany.

Apart from the individuals who were influenced by Nast to enter the ministry to German immigrants in America, Nast engaged in other activities which had the effect of consolidating the German districts in their mission in America. His work at the General Conference of 1848, gave the German districts their vision and legal standing to become integrated, but separate Conferences within American Methodism, charged with the task of reaching the 5 million German immigrants that would arrive.

Nast provided the first translations of foundational Methodist documents to sustain the German-speaking movement. He was the first translator into German of complete parts of the Methodist Book of Discipline, such as the “Teaching and Church Order,” “Articles of Religion,” and “The General Rules.” In addition, he translated a collection of Wesley’s forty-four standard sermons, as well as a forty-part collection of German hymns (1839), not to mention various other administrative documents which nourished connectionalism among the German districts within the wider American Methodist body.

Also significant for creating a shared sense of mission and connectionalism was Nast’s work as editor of regular theological publications. Most importantly, Nast published and edited the influential German language Methodist weekly periodical Der Christliche Apologete, first published in January 1839 and continuing under his editorship until his son took over in 1889. This weekly periodical, along with Nast’s multiple series of German catechisms, were widely read and influential theological documents for German-speaking Methodists both in America and later in Germany. The tone and theology of Der Apologete was thoroughly missional-with Nast’s primary concern always to ”save souls among all German immigrants.”

The relatively quick spread of Methodism in Germany was clearly due in large part to Nast’s leadership in the North American Methodist mission and his role as a bridge figure between English-speaking Methodism and Continental world-views.

Nast’s pioneer missions to German-Americans prospered so quickly that as early as 1844 the Methodist Episcopal General Conference considered ways to explore mounting a mission back to Germany itself. Thus, Nast and the other German-American Methodists wasted no time organizing a mission to their homeland, although it began informally enough. Letters back home to family and friends had provided for many years the first Methodist preaching in Germany.

Nast embarked on a tour of Germany in 1844 under commission of the General Conference of the Methodist Episcopal Church. On this tour he sought persons and families with whom he had some prior connections in order to scout the prospects of mounting a sustained Methodist mission in Germany supported by the German-American Conferences.

Nast and his German-speaking American Methodist Episcopal Church followers entered Germany remarkably quickly and with a lasting mission contribution. L. S. Jacoby, early protege of Nast and the superintendent of the German district in St. Louis, was sent to Bremen in December 1849 at age thirty-six, against his wife’s wishes and armed with only five dollars worth of tracts to found and oversee the work in that city. Jacoby’s successful work in Bremen soon spread onward. Another German-American who had been trained by Nast, Ludwig Nippert, was sent to Berlin in 1858 as the first ordained Methodist pastor in that great capital.

By 1860 a flourishing publishing house was established in Bremen, and by the 1890s German Methodism had become so vigorous and self-supporting that it mounted further missions into Switzerland, Austro-Hungary, and Russia. The success of the small, but growing band of German-American Methodist missionaries could be traced back to Nast’s leadership training and his mission scouting tour of 1844.