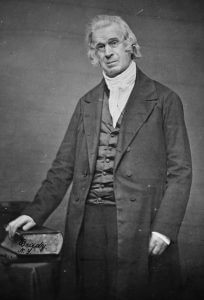 Nathan Bangs, 1778 -1862, was the primary organizer and first administrator of the Methodist Episcopal Missionary Society, founded in 1819. He was concurrently for almost a decade the head of the denomination’s Book Concern. Thus, Bangs had a major impact on the origins of two of the United Methodist Church’s major continuing organizations, the General Board of Global Ministries, the successor of the Missionary Society, and the United Methodist Publishing House, which continues the work of the early 19th century Methodist Book Concern.

Just In time for the mission agency’s bicentennial celebration, a new biography of Bangs by historian Jared Maddox has been published by the church’s General Board of Higher Education and Ministry. Bangs was also the second president of Wesleyan University in Connecticut. Maddox’ book, “Nathan Bangs and the Methodist Episcopal Church,” is subtitled, “The Spread of Scriptural Holiness in Nineteenth-Century America”. (Hyperlink: https://www.gbhem.org/article/latest-book-release-gbhem-publishing-challenges-assumptions-about-middle-class-methodism%E2%80%99s)

Bangs exerted strong influence on early Methodism in both the United States and Canada. Born in Stratford, Connecticut, he was the son of a prominent New England Anglican family but found his religious home in the Methodist movement while working as a teacher and land surveyor in Upper Canada (today, the area along the Ontario-Québec boundary.) He was ordained deacon and elder in the New York Conference and returned to Canada as a missionary circuit rider. He would serve circuits in Canada and the US and would become the equivalent of today’s district superintendent. He did not aspire to the episcopacy when recommended for the office.

The young preacher was based in New York City when on April 5, 1819 the Missionary Society was organized. The following year, after the society was authorized by the General Conference to raise money for mission, he became the first employed executive. The work fit well with that of his role as book agent since the Book Concern was one of few Methodist entities equipped to receive and disperse funds.

Bangs did not hold a college or university degree but was extremely well self-educated, writing extensively on theology and early American Methodism. His multi-volume “History of the Methodist Episcopal Church from its Origin in 1776 to the General Conference of 1840” appeared the year before he resigned from the Missionary Society. He also edited publications that would become widely distributed and identified with American Methodism, including the (New York) Christian Advocate and the Methodist Magazine and Quarterly Review.

He left the Society at age 62 in 1841 to become the president of Wesleyan University, a school with then strong Methodist ties in Middletown, Connecticut. His skills did not fare well in higher education. In 1842 he was back in New York City where he devoted himself to writing and pastoral work, although he remained on the Wesleyan board of directors until his death.

Bangs in 1806 married Mary Bolton of Edwardsburgh Township, Upper Canada, and they had 11 children. He died on May 3, 1862 in New York City.

This brief profile was written by Elliott Wright, using several print and online sources, including the many entries on Bangs in the standard history of Methodist missions, “Early American Methodism: 1769 -1844, Volume one: Missionary Motivation and Expansion,” by Wade Crawford Barclay, New York, 1949.