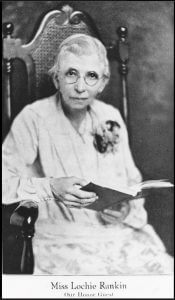 Lochie Rankin was the first unmarried woman to be sent abroad as a missionary by the MECS. She was also the first missionary supported by the Woman’s Foreign Mission Society of the church. She was born in Milan, Tennessee, in 1851. Upon reaching young womanhood, she volunteered herself for service as a teacher in Native American mission schools in Oklahoma. While teaching at New Hope Female School, she heard that a new Methodist woman’s group was seeking a volunteer to go to China to aid Mary Lambuth in her work.

Rankin volunteered and was sent to China in 1878. After an apprenticeship with Mrs. Lambuth, she opened a school for girls in Nanziang. Joined by her sister Dora (the second woman sent), they worked together for six years until Dora died. The bereft Lochie stayed at her post and later opened a boys’ school in Huchow. After nearly fifty years of missions work in China, she retired in 1926. She was given lodging at Scarritt College in Nashville and lived there as a mentor and role model to a succeeding generation of missionaries until she died in 1929. Rankin was an icon, a heroine, a symbol to thousands of Southern Methodists, women and men alike. She stood at the pinnacle of Southern admiration alongside the Baptist missionary Lottie Moon.

Taken from Robert W. Sledge, “Five Dollars and Myself”: The History of Mission of the Methodist Episcopal Church, South, 1845-1939. (New York: General Board of Global Ministries, The United Methodist Church, 2005), p. 229.