Teacher, nurse, & administrator who spent more than 50 years ministering to lepers in India 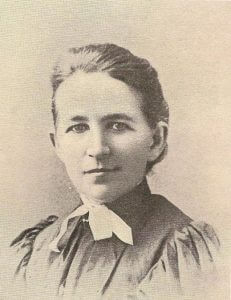 Mary Reed was born in 1854 in Lowell, Ohio, to Wesley W. Reed and Sarah Ann (Henderson) Reed. After graduation from Ohio Central Normal School in Worthington, Ohio, she began a teaching career. When she was 30, she applied to join the Woman’s Foreign Missionary Society (WFMS) of the Methodist Episcopal Church to serve in India.

Reed was accepted into service and set sail for India in 1884. Her assignment was with zenana visitation, an evangelistic outreach to sheltered and secluded women in Cawnpore, India. She continued in this work for six years, but she had bouts with poor health. In 1890, she returned to the United States for medical tests and recovery. The doctors had difficulty making a diagnosis, but Reed herself suspected she had leprosy, a diagnosis that was later confirmed. Nevertheless, Reed went back to India to continue working.

At her request, Bishop James Thoburn of the MEC work in India decided to reassign Reed. He approached the British interdenominational Mission to Lepers in India and the East, which assigned her to work in the Chandag Leper Asylum in the Himalayan foothills. She remained as a district missionary of the WFMS and in 1892 was assigned as the director of the Chandag Asylum.

In addition to personally seeing to the needs of the patients of the asylum and teaching reading and religious classes, Reed greatly improved their living situation. Over time, she replaced huts with cottages and oversaw the construction of a new water-supply system, a chapel, a school, a small hospital, and a dispensary. She acquired 48 more acres of land for the leper colony. For seven years with the WFMS, she also supervised six village schools and three Sunday schools within a five-mile radius of the asylum.

By 1897, of 85 lepers in the colony, 67 had become Christian. In 1898, Reed refused to return to the United States for medical treatment and severed ties with the WFMS, but she continued her missionary work with the British Mission to Lepers in India and the East. By 1899, her health was much better.

In 1917, the Government of India awarded Reed the Kaisar-i-Hind Medal for her work with lepers in Chandag. She rarely left the leper colony and only returned to the United States once more in her lifetime. Leprosy resurfaced for Reed in 1932, but she continued to supervise the leper asylum until 1938 for a total of 47 years. She lived and worked there until she died in 1943 at the age of 89. Her death was the result of an accident caused by her failing eyesight, but her poor eyesight was likely the result of her years living with leprosy.