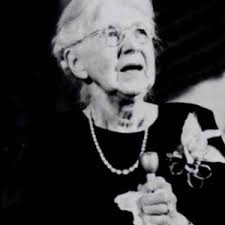 (This profile is adapted with excerpts from a profile by Mary McLanachan in the November, 1983 issue of New World Outlook magazine.  Mrs. Showers was 98 years old at the time of publication. She was born on January 4, 1885, into the family of Dr. and Mrs. E. S. Lorenz, founders of a music publishing company. Her mother was from the Kumler family that produced two United Brethren bishops.)

“At the time of her birth, her father was a United Brethren minister serving a Dayton congregation. As was then customary, an annual revival was held in each church early in the calendar year. Her father was preparing for this revival which began on the Sunday of her birth. Because he thought the women of the congregation might be so excited over a baby arriving in the parsonage, he kept her arrival a secret until after the opening session of the revival…. Her mother was active in the Women’s Missionary Association (United Brethren in Christ), both in the local and national organizations, so it was natural for her to join the Gleaners Band, the children’s missionary organization, at age five; to teach a Sunday school class at age 14; sing in the choir of Summit Street Church; and progress to membership in the Young Women’s Missionary Society and later the women’s organization.

“After graduation from Bryn Mawr College, Bryn Mawr, Pa. she returned to Dayton. She was elected as the first Secretary of Young Women’s Work, which became a distinct department of the Women’s Missionary Association. The first Young Women’s Band was formed on the campus of Otterbein College in 1883, with the other United Brethren colleges following this pattern. It was not until 1908, however, that the national organization began with Justina Lorenz as the secretary. This organization was the forerunner of the Otterbein Guild, which developed over the years into a strong arm of the women’s work. In April, 1911 , she married J. Balmer Showers, then a professor of New Testament Greek at Union Biblical Seminary (now United Theological Seminary), Dayton, Ohio. As a young professor, plans were made for him to have a year of study abroad where he concentrated on the study of Greek in the University of Berlin. This year abroad also gave them an opportunity for travel in Europe. A later sabbatical included the Holy Land, Egypt and the area of the Apostle Paul’s missionary journeys.

“In 1915 Mrs. Showers was elected president of Miami (Ohio) Conference Branch, Women’s Missionary Association (W.M.A.), a responsibility which she ably filled for ten years. At her request, she stepped aside, but after another five years when she was not in attendance at the annual convention, she was re-elected and again served as Branch president, this time for eleven years. For twenty-five years, she also served on the Board of Trustees of the Women’s Missionary Association, some of those years as vice-president. In 1941 she was elected national president.

“The Evangelical and United Brethren Churches merged in the fall of 1946. In the reorganization of women’s work, Mrs. Showers was elected as the first president and continued in that office for two terms (eight years), the allotted time to serve in that office. While mergers are never easy, the working together of Council and staff chosen from the former denominations from the beginning was harmonious, largely due to Mrs. Showers’ wise and sensitive leadership. J. Balmer Showers was elected a bishop in May, 1945. In 1954, Bishop and Mrs. Showers were sent by the Evangelical United Brethren Board of Missions to Latin America to study the work there. On this assignment Bishop Showers was impressed by the fact that missionaries had problems as to where to live during their furloughs. Thus was planted the seed of an idea. When he retired in 1954 and they returned to Dayton to live, they bought a house large enough to accommodate several missionary families. Mission Manor was dedicated on October 25, 1960, at 201 E. Schantz Avenue, in Oakwood, a suburb of Dayton, Ohio.

“The Bishop lived only a few years to see this dream realized, but Mrs. Showers has had the joy of being a volunteer hostess to many missionary families in the two apartments the house provides (one quite large enough to accommodate a sizeable family).”

By Mary McLanachan. Mary McLanachan was editor of The Evangel (later World Evangel) of the Evangelical United Brethren Church and associate editor of Response, the magazine of United Methodist Women, for two years.