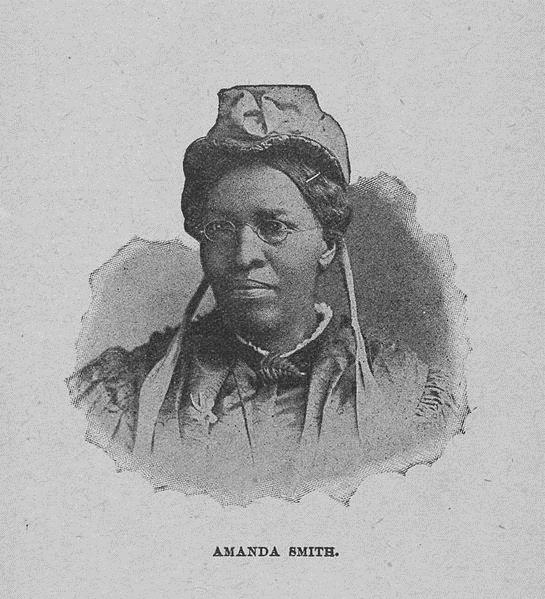 Amanda Berry was born into slavery at Long Green, Maryland. She was married in 1854 to Calvin M. Devine and her conversion followed two years later. After her husband died in the Civil War, she moved to Philadelphia and married James Smith, and ordained deacon at Mother Bethel African Methodist Episcopal (AME) Church. After visiting Green Street Church in Philadelphia, where she heard John S. Inskip, a prominent Wesleyan holiness leader, preach, she testified that she had received her sanctification there. Following the death of her second husband in 1869, she traveled as a holiness evangelist, becoming a popular speaker in many churches and camp meetings. Smith’s friendships included prominent holiness and prohibition movement leaders such as Hannah Whitall Smith and Frances Willard.

Her overseas ministry began with a visit to England in 1878. From there, Smith went to India as a missionary; Methodist bishop James M. Thoburn thought so highly of her that he wrote the introduction to her Autobiography (1893). In Africa, she worked with Methodist missionaries, including Bishop William Taylor. She was honored by African Americans and whites alike. Smith spent her last years caring for needy African American children at her orphanage in Harvey, Illinois; she was also connected to the founding of the National Association for the Advancement of Colored People. Her spiritual fervor and calls for justice in society, and her work in missions inspired an expanded role for women in ministry, particularly within the AME and Methodist churches.

By Gary B. McGee.

Smith, Amanda Berry. An Autobiography The Story of the Lord’s Dealings with Mrs. Amanda Smith, the Colored Evangelist : Containing an Account of Her Life Work of Faith, and Her Travels in America, England, Ireland, Scotland, India and Africa, As an Independent Missionary. Chicago: Meyer, 1893.

The photo is in the public domain.