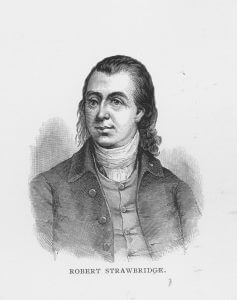 Robert Strawbridge ( ? -1781) emigrated from Ireland to Frederick County, Maryland sometime between 1760 and 1766. A Methodist preacher in Ireland, he began preaching in Maryland soon after his arrival, making him the pioneer of Methodism on the American continent.

He preached in his log cabin home and began organizing Methodist societies as early as 1763 or 1764. The first class met in his home and soon a second met at a nearby home. John Evans (1734-1827), one of Strawbridge’s converts, led the first class from 1768-1804. These were perhaps the earliest Methodist organizations in American history. During these early years, Strawbridge also built log meeting houses at Sam’s Creek and Bush near Aberdeen.

Strawbridge soon began itinerating in Maryland, Pennsylvania, and Virginia, often preaching the first Methodist sermons heard in a settlement. He established a number of societies, prompted the construction of several Methodist chapels, possibly including the Old Stone Church in Leesburg, Virginia. He was tremendously popular and had a major influence on many young preachers.

Strawbridge, who probably was never ordained, nevertheless regularly administered the sacraments. At the first conference of Methodist preachers in America (1773), this practice was condemned, although an exception was made for Strawbridge, who was allowed to continue it under Asbury’s direction. Francis Asbury in particular was unhappy about the matter, especially when Strawbridge ignored the conference’s action and continued to administer the Lord’s Supper as before!

Asbury recorded his frustration in his journal entry for June 24, 1774: “[O]ne of these letters informed me that Mr. Strawbridge was very officious in adminstering the ordinances. What strange infatuation attends that man! Why will he run before Providence?”

Taken with permission from Heritage Landmarks: A Traveler’s Guide to the Most Sacred Places in The United Methodist Church, by the General Commission on Archives and History. For more information, see http://www.gcah.org/research/travelers-guide/robert-strawbridge-house