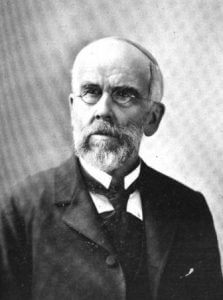 Born in Paris, New York, White studied both theology and medicine at Yale University after graduating from Wesleyan University. He and his wife, Jane Atwater White, together with Judson D. Collins, arrived in Foochow (Fuzhou) in September 1847, and opened the first Methodist work in China. In 1851, three years after the death of his wife, White married Mary Seely shortly after her arrival in China.

Like the American Board and Anglican missionaries who preceded them, the American Methodists met opposition and hostility. White was beaten by a mob in 1848. In the “White-Colder” case, they encountered bitter and protracted opposition to the construction of mission residences on property they had purchased. They opened a chapel where White preached to the curious who came in from the street. They printed a hymnal, with colloquial translations of Western hymns, and printed a colloquial version of Matthew’s gospel, all translated by White. Although their primary goal was to make converts to Christianity, White and his colleagues practiced medicine and opened small day schools.

Because of Mary’s poor health, the Whites were forced to return to the United States in 1852, never to return to China; the first Methodist convert was not baptized until five years later. White undertook further medical studies and for many years was a well-known professor of medicine at Yale while continuing as a superannuated clergy member of the Methodist Church.

By Donald E. MacInnis, Formerly Director of the China Program, National Council of Churches in the USA, Coordinator for China Research of the Maryknoll Fathers and Brothers, Maryknoll, New York, USA

This article is reprinted from Biographical Dictionary of Christian Missions, Macmillan Reference USA, copyright 1998 Gerald H. Anderson, by permission of The Gale Group; Wm. B. Eerdmans Publishing Co., Grand Rapids, Michigan. All rights reserved. It is taken, with permission, from the Biographical Dictionary of Chinese Christianity: http://www.bdcconline.net/en/stories/w/white-moses-clark.php

White MSS relating to the founding of Methodist Missions in Foochow, China, are in the Methodist archives, Madison, N.J.