Advocate for Missions and Education in the Evangelical Association 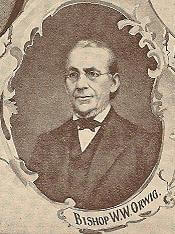 Distinctive bulges on the bridge of Bishop Orwig’s nose appear in Orwig family members to this day, testifying to the persistence of genetic traits. The bishop himself stood out in a debate over another persistent human trait: sin. He defended the position that only those who have been purified of all sin can enter heaven.

In 1856, Orwig published an article in which he asked about the fate of those “who die without entire sanctification,” and replied that “they will inevitably be lost.” A partially pure person has as little hope of heaven “as one who is altogether impure.” It was an extreme position that cost him his re-election as bishop.

But before and after that defeat, Orwig significantly modernized the Evangelical Association, which had been founded by Jacob Albright in the early years of the nineteenth century, and which now constitutes part of The United Methodist Church.

A Pennsylvania German by birth, Orwig experienced conversion in 1826 and was received into the ministry of the Evangelical Association in 1828. Five years later, his fellow preachers selected him as their district superintendent. After four years in that position, he assumed responsibility for his denomination’s publishing activities, including the editorship of its principal journal.

A letter to the editor challenged him to do something about missions. He responded by organizing an annual conference missionary society in 1838, which prompted the next General Conference to found the Missionary Society of the Evangelical Association.

Just as missions was a “modern” cause in the 1830’s, so higher education appeared radical to many Evangelicals. But Orwig, as one of his contemporaries noted, “advocated it strongly, in the days when the cause was anything but popular among our people, and when many saw little good and much evil in higher institutions of learning.”

Orwig championed the cause of education so effectively that he became the first principal of Union Seminary, an Evangelical Association boarding school in Central Pennsylvania, which eventually became Albright College, one of United Methodism’s current educational institutions. Union, which opened in 1856, enrolled women as well as men, largely became Orwig insisted upon it. The students, who numbered 264 by 1858, could study English, ancient and modern languages, math, science, psychology, ethics, theology, music, bookkeeping, and be trained as public school teachers. Orwig not only administered the school but also taught German and ethics.

The 1859 Evangelical General Conference elected him to the episcopacy. Four years later, recognizing that Solomon Neitz–his opponent in the controversy over whether partially pure people would go to heaven–was going to defeat him, Orwig asked his supporters to switch their votes to a third candidate, J. J. Esher, who won the bishopric.

Orwig returned to editorial activities, served a four-year term as treasurer of his denomination’s missionary society, and held pastorates, along with the post of district superintendent, before his death at age 79. In addition, he wrote the first history of the Evangelical Association, a catechism, a book on pastoral theology, and, of course, a study of sanctification–the doctrine that deals with the extent to which sin is overcome in the lives of Christians.

One of Orwig’s contemporaries said of him: “His intellect does not seem to be of that brilliant order which startles and amazes the world.” Which may account for his failure to recognize that impurities persist in Christians, just as distinctive bulges on the nose may be passed down from generation to generation in a family. Nevertheless Orwig’s mind was sufficiently sharp and subtle to sustain his advocacy of such forward-looking causes as publishing, missions, and higher education for women.

Taken from “An Evangelical Bishop Who Restricted Heaven To The Sanctified 1810-1889,” by John G. McEllhenney, General Commission on Archives & History, http://gcah.org/history/biographies/william-orwig.