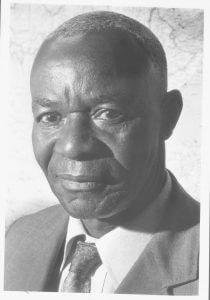 Born in Mozambique in 1914, Zunguze became a Christian through his wife, Thelma, who was a graduate of the Hartzell’s Girl School in Chicuque. He was educated at a Methodist Episcopal Church school in Inhambane province, at the Cambine mission, and Old Umtali in then-Southern Rhodesia (now Zimbabwe), where he studied theology. During the early part of the twentieth century, African Methodists in Mozambique agitated from control. In the 1920s and 1930s, the Portuguese colonial government placed restrictions on Methodists because of their sympathy with forced laborers. These dynamics undoubtedly influenced Zunguze’s thinking as a young man and prepared him well for the struggles ahead. He entered the ministry in 1946 and was ordained elder in 1950. He served as pastor of the Cambine Methodist Church, one of the largest churches in Mozambique. He was a delegate to the Africa Central Conference three times from 1948 to 1956 and was elected bishop in 1964, the first African to become a bishop in The Methodist Church. Although the Portuguese government had prohibited him from leaving Mozambique in 1964, he was named to the Commission on Ecumenical Affairs at the 1968 General Conference. He died October 26, 1980.